Busan Citizens Park is back to provide places to help citizens have a relaxing time.

Go on a picnic in the center of a city.

Wish Like({{iLikeThisTotal}})
Military camp and park—these two words do not match well together. However, there is a place where a military camp is reborn as a park, namely Busan Citizens Park. For 70 years after the liberation in South Korea, this place had been called the “US Army Camp Hialeah,” but now it’s back as a resting area for people in Busan.
In this park, you will see the man-made, white sand beach and a fountain. A sand beach in a park—this is so like Busan. The scene where a father and his two sons are playing with sand in the middle of the beach rouses that warm feeling. Putting on a gentle smile, you will walk on a wooden bridge across a pond and look up the greenery in the park, making you feel refreshed.
The most popular spot in this park is the “V Road,” where everyone steps up with one foot while holding up a black umbrella. This place became famous after V, a member of Bangtan Boys (BTS), visited and took a picture. Leaving behind the people having a fun time as they imitate the poses, head to the center of the park. There lies the wide and huge “Hialeah Lawn Plaza.”
In the plaza, people in groups are enjoying the afternoon while laying their mats and eating prepared food. The excited children are already on their way to the lawn field. This looks too good to simply let it pass. Thus, you settle at the side and rest. A ray of warm sunshine, a cool breeze, and the freshness of the greenery touch your body.
The round-shaped building, which is the barrack reconstruction of Camp Hayaria, has various amenities. If you are with your children, stop by “Pororo Library.” Pororo is called the president of children. They will be so excited while exploring Pororo’s world.
Now, you will find many places to have time with your children in this park. If you make a reservation, you can try out handicrafts through a workshop. There is also a book café in the forest. As you turn to the other side, there are various play facilities, where children can explore. As we see your children in this place, we can see a vibrant future for Busan.
You see the traces of history in the beautiful scenery in front of you. It is said that the oak tree, which had lived in this place long before the park was built, is 100 years old. This old living tree had witnessed the greatest changes—from the beginning of the Japanese colonial period in South Korea to the US Army Camp Hialeah and Busan Citizens Park.
The “Pillars of Memory” still stand high, as they are recycled products of wooden power poles that remained in Camp Hialeah. This is a reminder that the park was once occupied by the US Army and had a difficult time to be back with the Busan citizens. This is why the park is very special and beautiful.

Cooking is not allowed in the park.
Keep companion pets on a leash companion and remove their wastes. 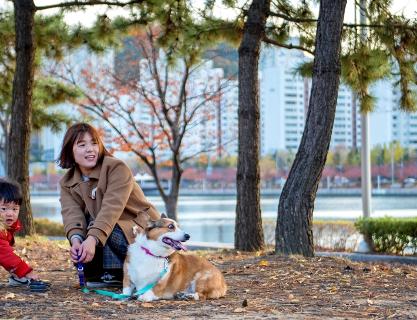