Wish Like({{iLikeThisTotal}})
Geumjeongsan Mountain in Busan, the most popular peak next to Bukhansan Mountain in Seoul .
The mountain starts from Geumjeong-gu, Busan, stretching to Buk-gu in Yangsan-si in Gyeongsangnam-do. Thanks to its wide scope, it’s easily accessible both in the center of Busan and in the suburbs. In some cases, the entrance and the way out are far from each other. Let’s head to Geumjeongsan Mountain, which has the longest fortress in Korea, and Beomeosa Temple, one of the three largest temples in the Yeongnam area.
There are different trails to climb the mountain, but it's good to start at Beomeosa Temple, pass through the North Gate and Geumsaem Well, and then trek Godangbong Peak.
The starting point is Iljumun Gate, which has four stone pillars symbolizing safeguards for Beomeosa Temple. Start your hike, after passing through Beomsa Temple with its cozy and peaceful atmosphere and follow the signs that guide the trail to reach Godangbong Peak.
The sound of clear valley water flowing through large locks cheers you up from the beginning of the trail. The green leaves above head and the clear sounds of birds make you feel refreshed from the start.
The trail is not so steep and all the different dirt paths, wooden decks, and stairs keep you amused on your walk. Then you meet a rocky uphill path and after its peak it will gradually and gently ease your walking. From this point, the North Gate of Geumjeongsanseong Fortress is at a very short distance. Once you reach there, you are arriving at Godangbong Peak. Geumjeong Fortress is not that high or fancy, but it is stout and strong as it is made from granite from Geumjeongsan Mountain. Very shortly after passing through North Gate and Godangsaem Well, you arrive at Geumsaem Well and Godangbong Peak.
Let’s go to Geumsaem Well first. After you climb up the rock with a rope, you’ll reach the well located at the very end of the rocky cliff. In Korean, geumsaem means “golden well,” originating from the water that glows golden and glitters in front of your eyes. Believed to never dry out, the well looks like a small hole, but is a fairly large spring three meters in circumference. Now, it’s time to cool the beads of perspiration standing out on your forehead. The well also provides great scenery as it overlooks the bends of the ridge.
Next is to get to the top, which begins with rough rocks and stairs. Then, ascend the iron circular staircase to finally reach Godangbong Peak. Its stone marker that stands in the middle of rising rocks is also a must-see spot, and the great view from the top is an awesome reward.
Stand at the top of Geumjeongsan Mountain, and look back on the path climbing the peak. You will see Geumjeongsanseong Fortress stretching all the way from the Fourth Watchtower through Wonhyobong Peak. Once you’ve ascended to Godangbong Peak, you’ll see the fortress unevenly extending along the ridge. You can also see the panoramic view of Busan located like a valley between mountains. Busan is such a beautiful city with mountains. 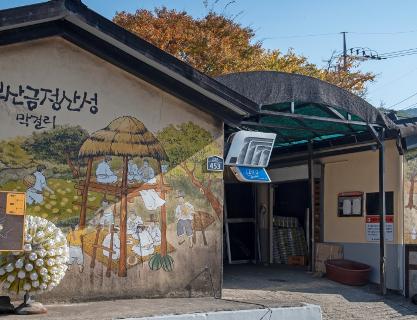 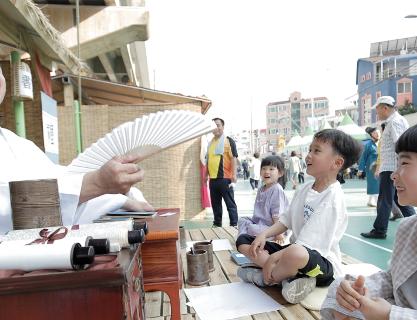