Wish Like({{iLikeThisTotal}})
Now that we are at the cusp of summer, nighttime is just the right time to do things outdoors thanks to cool winds that blow after sunset. If that is the case, why not take a City Tour Bus and enjoy the beautiful night view in Busan? We invite you to a nighttime tour that takes you across the Gwangandaegyo, Busanhangdaegyo, and other beautiful bridges in Busan for a true taste of night view in this wonderful city.

Busan City Tour Bus, which offers a comfortable ride on a bus to all the major tourist sites in Busan, has a very special ride that only takes place in Friday and Saturday evenings: It is the Night View Tour, which covers all the most highly regarded night view spots in Busan. Because the trip also takes one along all the major bridges in Busan, like the Gwangandaegyo, Busanhangdaegyo, Namhangdaegyo, and Busandaegyo Bridges, it is also known as the "Bridge Tour".
Busan City Tour Bus Night View Tour starts at 19:30, in Busan Station square. If you want to have an even closer access to the view, make sure to take a spot on the 2nd floor of the bus, which is open to the air. The bus starts off with the sunset coloring the western sky red, takes one across the Busandaegyo Bridge to Yeongdo, and proceeds to the colorful Busanhangdaegyo Bridge.

When the bus reaches Busanhangdaegyo Bridge, a massive suspension bridge that crosses the North Port, travelers finally see what being a port city means for Busan. The view there overlooks a pier where massive ships are moored at. Many ships, their lights burning as bright as day, carry the containers up and down. The light from the tower in Busanhangdaegyo Bridge illuminates the whole spectacle in a rather unreal light.

Into the charms of Gwangalli

Past the Busanhangdaegyo Bridge is Gwangandaegyo Bridge, one of the most recognizable symbols of Busan. The left-hand side of the bridge is dominated by the futuristic view of Haeundae Marine City and its skyscrapers. Once the bus reaches the Gwangalli Beach, the bus stops for 10 minutes for some quality photo-op time.
Even though the sun has sunk beyond the horizon, traces of blue remain in the sky. The skyscrapers turn on their lights, and Gwangandaegyo Bridge showers the beach with its lighting. It is the best time to take a picture of the view. There's no need to move for a better view: one can simply take a picture of the bridge in front of the bus. The lighting can be insufficient, so make sure to compensate or hold your camera tightly!
At 20:00 and 22:00 every Saturday and Sunday evening, Gwangalli Beach hosts a drone show. Nearly 300 drones rise into the air and draw pictures on the night sky with brushes of light. They dance in tune in music, and create letters. People can't help but cry out in wonder with each movement of the drone. It has established itself as a new favorite among visitors to Gwangalli, so make sure to catch the show.

After a brief stop, the City Tour Bus heads to Haeundae. After passing through Suyeong Bridge No 2, from which one has a wonderful view of the Centum City, one is brought to the view of the Marine City's skyscrapers, the Haeundae Beach, and Busan Exhibition and Convention Center (Bexco), before the bus drives on the Gwangandaegyo Bridge. Up close, the main tower in Gwangandaegyo Bridge impresses with its sheer presence. It feels quite surreal to feel the sea breeze on top of the sea.

But the best of Busan City Tour is yet to come: A trip through the massive bridges of Busan, and a chance to see why this tour is also called the "Bridge Tour".
After Gwangandaegyo Bridge, the bus heads right to the Busanhangdaegyo Bridge. At its peak, Busanhangdaegyo Bridge offers an expansive view of Busan's old city center, namely Yeongdo, Nampo-dong, and Choryang, along the shore. Smaller lights illuminate the Sanbok Road areas. So is the beauty of Busan from the sea.

Next is the Namhangdaegyo Bridge. This bridge connects Yeongdo with Songdo. While it is not as extravagant as Gwangandaegyo or Busanhangdaegyo Bridges, the view from the bridge punches well above its weight. In particular, the romantic view of the lights on the sea in front of Yeongdo, generated by numerous ships, is said to be a must-see highlight of this tour.
After passing through the three bridges, the bus arrives at Songdo Beach. Songdo Beach was the first public beach in Korea, and with the opening of the overwater cable car service, this historied beach established its presence among the people of Korea once again. If the City Tour Bus took us above the sea in wheels, the cable car service will fly us above the sea at night. The view from the sky is nothing short of fantastic, Songdo Beach, Yeongdo, and the sea glittering in a view that cannot be put to words. Another option is to take a walk along the Songdo Cloud Trail near the cable car stop. Its transparent floor offers a different sort of excitement at night.

The bus stops for a 10-minute photo break in Songdo. Once you've had your fill of photographs, the bus passes through the Nampo-dong area, home to Jagalchi and Gukje Markets, and returns to the starting point of the tour at Busan Station. The 2-hour 30-minute ride on the bus passes like a fantastical dream, just like the night view that unfolded before us in that trip. 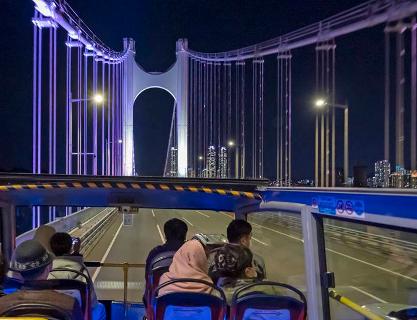 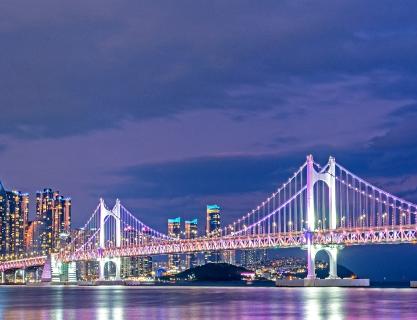 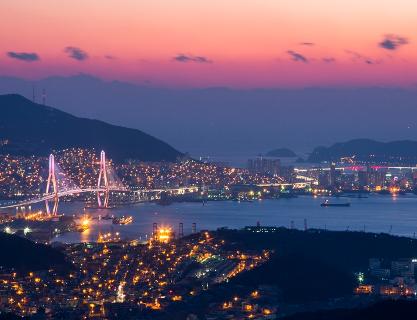 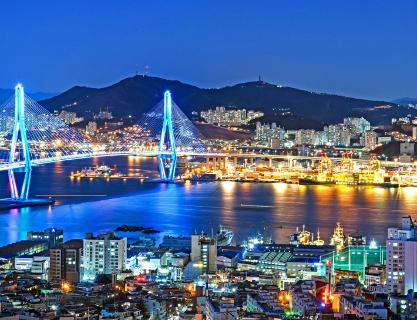 A night scape tour in Busan 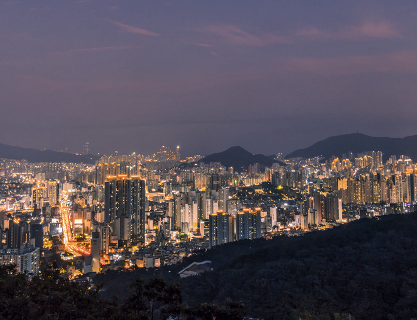 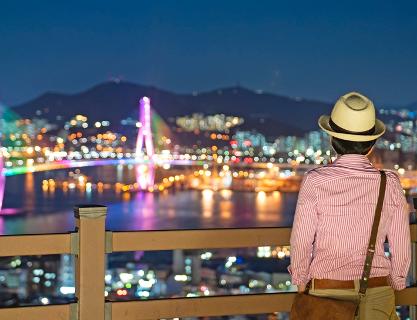