During the construction of Busan Metro Suan Station in 2005, a number of relics and remains of the Japanese Invasion of Korea in 1592 were discovered in the site. Moreover, the remains of civilians and the soldiers of Dongnae who were killed by Japanese invaders were found hundreds of years later. As such, the Suan Station Office has established the Dongnaeeupseong History Hall to introduce the story of Dongnaeeupseong at that time through its foundings.
The Dongnae-bu Magistrate's Office played the role of the Busan City Hall today. The Chungsindang Hall, where the magistrate used to work, is situated after passing the entrance. Retaining its old appearance, the hall displays the list of previous Dongnae-bu magistrates as well as the black and white photos of Dongnae-bu Magistrate’s Office and Dongnaeeupseong Walled Town. Moreover, it provides an experience program where visitors can try wearing traditional clothes.
The Dongnaehyanggyo Local Confucian School used to be the national school of the Joseon Dynasty. It has a two-story main gate named Banhwaru Pavilion with stone walls on both sides. Meanwhile, the Myeongnyundang Lecture Hall, which was the educational space for Confucian students, is characterized by its simple features, such as a black-tiled roof and pillars, as well as a patternless rafter, creating a calm atmosphere.
The Ancient Tombs’ area in Bokcheon-dong, which looks like a small park, is an important site with relics of the Period of Gaya Confederacy. While walking on the hill, you will find the square flower bed where a tomb was discovered, as well as the silver-domed outdoor exhibition hall. The exhibition hall displays the restored interior of the tomb of the period of the Gaya Confederacy. Moreover, the Bokcheon Museum exhibits the foundings of the Ancient Tombs in Bokcheon-dong and introduces the history of Korea’s tombs.
A miniature model of the Dongnaeeupseong Walled Town is situated in the middle of the Dongnaeeupseong History Hall, which is a small single-storied hanok (traditional Korean house). Visitors are free to observe this model, which often draws children’s attention by comparing it with the real structure of the Walled Town.
The Jang Yeong-sil Science Garden is linked to the staircase behind the Dongnaeeupseong History Hall. It shows various scientific technologies of Jang Yeong-sil, who was the top scientist of the Joseon Dynasty from Dongnae, and displays his inventions, such as a celestial globe and a rain gauge.
If you pass through the North Gate by walking along a gravel path, you will reach the Bukjangdae Command Post on the peak of the Walled Town. Characterized by its black-tiled roof with white edges, the Bukjangdae Command Post is where the commander directed his army to defend the people and the area. It is said that those who passed this gate survived, but the rest who couldn’t come out died inside. Thus, this gate is also called “Insaengmun Gate,” which means “the gate of life.”
The Chungnyeolsa Shrine preserves the memorial tablets for those who died fighting for the country during the Japanese Invasion of 1592. This shrine is a simple building with neat features.

If you started the “Dongnae History Tour” lightheartedly, you will end it with a better understanding of local history and a deeper realization of the importance of its commemoration. 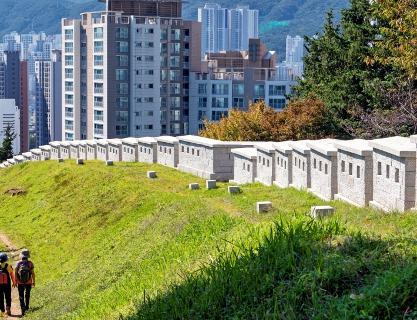 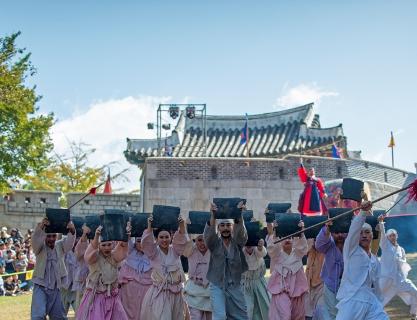 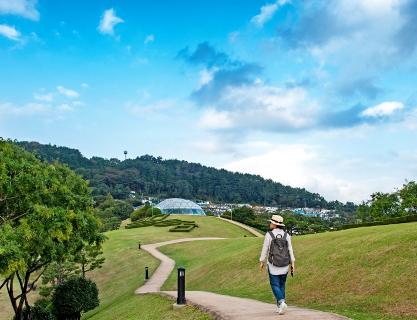 3Return of the Gaya Kingdom at the Bokcheon Museum / Ancient Tombs in Bokcheon-dong
Forty tombs of the ancient kingdom of Gaya were discovered at the redevelopment of an old residential area. Without any sign of tomb robbery, the numerous historical artifacts were excavated from the perfectly conserved Gaya Kingdom tombs, including gilt-bronze crowns, earthenware, armor, and helmets. Artifacts that enlighten us on the outstanding ironware culture of Gaya various shapes of tombs are displayed at the Bokcheon Museum. 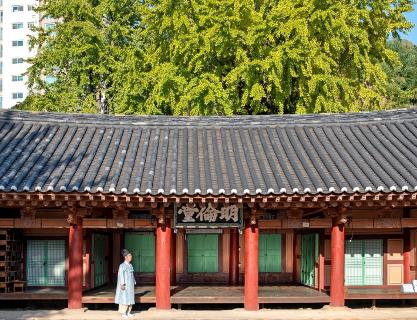 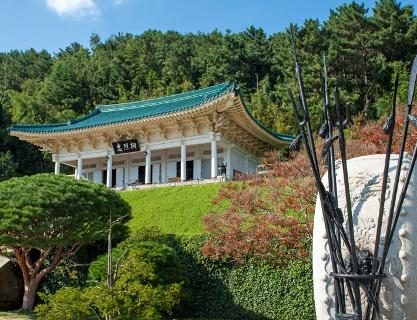 5Chungnyeolsa Shrine, May They Repose There Always
The Chungnyeolsa Shrine in Busan, with its neat and fitting appearance, is surrounded by the lush greenery of Mangwolsan Mountain in the back, facing the center of Busan to the front. The well-decorated garden, with its trees and pretty flowers that stretch along the pavement to the Main Hall, accentuates the solemn atmosphere of the shrine. Turning around after a moment of silence, you will be greeted by a wonderful vista of tradition blended with modernity. ** Use of Chungnyeolsa Shrine may be limited due to COVID-19. Please check out the website for information in advance.