Visit every corner of Busan along the Kang Daniel Tour

Wish Like({{iLikeThisTotal}})
Singer Kang Daniel made his debut in Produce 101 Season 2.
His popularity attracts his fans from all over the world to his hometown, Busan.
Busan is in the spotlight, thanks to the Kang Daniel tour.
Places all over Busan that his breath has touched have already been famous as a pilgrimage.
From his alma mater in Yeongdo, where he was born, to Busan’s famous attractions and restaurants,
let us jump into the Kang Daniel tour that satisfies both the hearts of his fans and allow them to go sightseeing at once.

The first spot to visit is Yeongdodaegyo Bridge—the only bascule bridge in Korea. It is no wonder that a trip to Yeongdo begins with Yeongdodaegyo Bridge. If you’re from Busan, you may know its symbolism. Kang Daniel must have also crossed this bridge, more times than he could count, with his family and friends. Yeongdodaegyo Bridge, which has connected Yeongdo to its mainland for ages, is open for 15 min at 2:00 p.m. Every day, people flock to see the bridge deck lifted toward the sky. If you want to see how the bridge works, you should watch it from Nampo-dong.

If you enter Yeongdo, take a bus to visit Shinseon Middle School. It is Kang Daniel’s alma mater, where he spent three years studying in Yeongdo—from the alleys, which he walked to school every morning to the playground, even to old school desks and chairs that he might have used. Some of his fans must feel excited just by imagining his school days while watching all the stuff he touched. Moreover, the blue oceanic view from the school is a bonus. To avoid interrupting students’ learning, you should observe silence.

You can’t miss the restaurant that specializes in sliced raw mackerel after visiting Shinseon Middle School, as it was where Kang Daniel first drank with his teacher.
Their tangy mackerel salad and seafood are beyond comparison. Thus, this restaurant may be small but feels big enough to create a cozy and friendly retro atmosphere.

Huinnyeoul Culture Village is one of the attractions in Yeongdo that you shouldn’t miss. Known as Santorini in Korea, it was reborn by the local artists and residents who joined in renovating this old neighborhood. Filled with beautifully crafted murals together with a clear view of the sea, this place is perfect for taking the best shot in your life. In addition, the idyllic landscape of the fishing village will leave you breathless, as you walk along the narrow alleys in the village, facing the sea as its yard.

Taejongdae Park has been a representative recreation area of Yeongdo since ancient times. Those who grew up in Yeongdo would always go on a picnic to the park as a schoolchild. Imagine Kang Daniel playing and jumping around on a picnic. Can you picture it? It takes more than an hour to look around Taejongdae Park on foot while appreciating a vast expanse of sea and the mysteries of unique rock formation. If walking is a little difficult, you can take the slow train called Danubi Train.
Starting with Yeongdodaegyo Bridge, the Kang Daniel tour course ends with a visit to Taejongdae Park. From the alleys along which Kang Daniel dreamed of being a singer as a child to its famous destinations, Yeongdo takes pride in rich and diverse views that fully deserve your attention for one day. 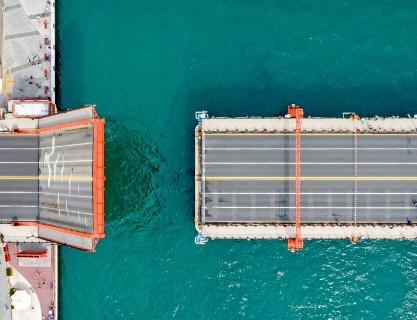 2Taejongdae Park’s 100 years of history with Yeongdo Lighthouse
This place allows you to walk along the green forest path and view the blue ocean simultaneously. The multicolored rocky coast boasts its beauty formed by years of crashing waves. We’re talking about Taejongdae Park at the southern end of Yeongdo, Busan. Taejongdae was named after King Taejong Muyeol of Silla, who used to stop by the region and practice archery as he was mesmerized by the beauty of the landscape. Taejongdae Park, where unique rocks are formed and visitors are greeted by the dense forest surrounded by the deep blue ocean, is a leading travel destination in Korea.

3Huinnyeoul Culture Village at the end of the steep cliff
Above the steep wall of the Jeoryeong Coastal Trail is a unique view of the village, where you can see small houses clustered along the narrow alley formed by the coast at the end of the cliff. This is where the sorrowful lives of refugees began and where the current cultural village community of Huinnyeoul Culture Village has been established.